Topping the Level (L)4 Non Pro division with a 218.5 score was Gina Schumacher riding One Mr JJ (Colonels Shining Gun x QHR Jamaica Express), owned and nominated by XCS Ranch LLC. Fresh off her Non Pro Derby win at the 2021 Cactus Reining Classic —as well as qualifying for the 2021 The Run For A Million Open—with Gunnastepya between the reins, the young German rider slid her way to the highest spot with One Mr JJ, a 5-year-old American Quarter Horse Stallion bred by Brent Loseke who she had also shown at the West World of Scottsdale event. Thrilled with having qualified her three horses for the finals, Schumacher was quick to thank NRHA Two Million Dollar Rider Bernard Fonck and NRHA Million Dollar Rider Ann Fonck for all their help in Cremona.

With a 213.5, Roberta Gianformaggio of Italy rode her own One Shot One Nic (Rooster Nic x Smart Jacalope) to lead the L3 Non Pro division. The stallion, bred and nominated by Gianformaggio, was shown by his owner in the 2019 German and IRHA Futurity.

On Tuesday, May 18, Consolation eligible riders will make their way back to the show arena for a chance to earn a ticket to the NRHA Euro Futurity Non Pro Finals which will be held on Thursday, May 20.

The first section of the NRHA European Open Futurity closed the day with Manuel Cortesi and AR Vintage Dream (NRHA Two Million Dollar Sire A Sparkling Vintage x Sweet Candy Dream), posting a 222—the highest score of the day— to lead the L4 Open division as well as the IRHA 4-year-old L4 Open Futurity. The sorrel stallion, owned by Azienda Agricola Cortesi Piero, was bred by Luigi Parise and nominated by Elisabetta Raviola. The second section will start the day on Sunday, May 16 and will be followed by the 2020 Quarter Dream IRHA/IRHBA Non Pro Futurity.

The event is held behind closed doors following COVID and EHV-1 protocols. 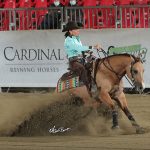 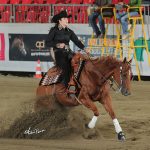 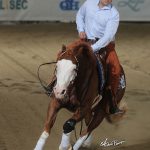 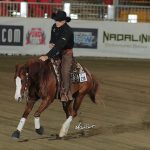 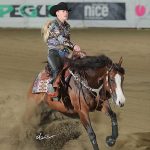 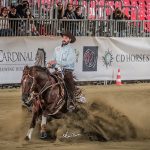