The young German rider not only made it to Italy, she performed to the highest score— a 223.5— in the qualifying go round, rode to top honors in the NRHA European Futurity Level (L)4 Non Pro Finals, all aboard One Mr JJ (Colonels Shining Gun x QHR Jamaica Express), where she also claimed reserve honors. “I showed ‘JJ,’ in the NRHA Non Pro Futurity in the U.S., where we made the finals, and then went on to show him in the U.S. He only arrived in Europe five days before this show, and that was a big gamble,” said Schumacher about the stallion owned and nominated by XCS Ranch LLC and bred by Brent Loseke. “I’m really happy it worked out and he was truly amazing here from day one. I have to thank Ann and Bernard Fonck for following up our training before coming here, and during the show. Now the plan is to go to some schooling shows and see what will come up for us.”

Belgian Bo Brutsaert and her KB CJ Gun, owned by her father Koen, closed her run with a 216 to win both the L3 and L2 Non Pro Championships. “This is the first horse by my old stallion SJ Whiz and out of one of my mares [KB Jenny Whiz A Gun], so I’m super excited,” said Brutsaert who also won the 2020 IRHA 4-year-old L2 Non Pro Futurity with her mount, bred by Bruko Reining and nominated by Koen Brutsaert. “We didn’t show that much due to the pandemic and I’m super happy to be back in the show pen even though, without having the opportunity to practice I was also a little scared before going in. I ride with Kim Obenhaus, who trained the mare since she was a 3-year-old, and this is her very first big show. Even though she’s not super easy, it’s so much fun to ride and show her. I want to put some money on her, have her join our string of broodmares and continue with my stallion’s bloodline.”

Taking reserve honors in the L3 with a 215 score were Adrienne Speidel and her own CDC Cromed Resolve (Custom Del Cielo x Kaysolve), a stallion bred and nominated by Fabian Strebel. The duo also placed second in the IRHA 4-year-old L4 Non Pro Futurity Finals.

“He is a very good and solid horse”, commented Maggiorani. “He was born at Oliviero Toscani’s facility and was raised at KN Reining Resort where I have been riding under the guidance of Andrea Castrucci since last summer. This was a good show for us, we did better in the consolation run, but we also managed everything in the final. We will continue the program and I hope to be able to show him at the next Derby.”

Sudati was also pleased with her run. “I am so happy! I still don’t realize what we have accomplished. I have to thank Angelo Benedusi and Pamela who helped me find this special mare. She was trained by Genni Lazzarini, who I must also thank because she is truly wonderful to ride. My first go was a bit unlucky, as I got a little emotional, but made it and got a chance to run in the finals where everything worked out perfectly.”

Stephanie Blessing and Dance Gotta Gun (Spooks Gotta Gun x Dance Little Spook), a mare owned by Grey Stone Ranch Germany GMBH bred and nominated by Quarter Dream captured the 2020 IRHA 4-year-old Non Pro Futurity Level 4 Championship scoring a 218.5 as well as third place honors in the Euro Futurity L4 Non Pro Finals which were run concurrently. “I’m super happy with these results,” she said. “We have had this mare since she was a 3-year-old and she already has €18.000 lifetime earnings (LTE). We are super happy with her and her upcoming babies. It’s amazing how this show has an incredible atmosphere even with the Covid-19 situation, we are so happy to be here!” 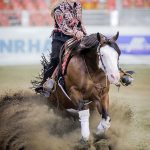 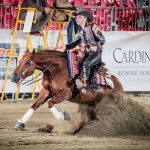 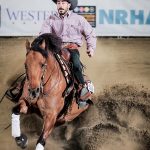 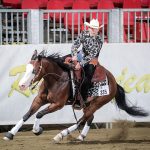 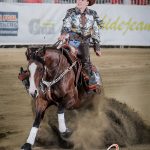