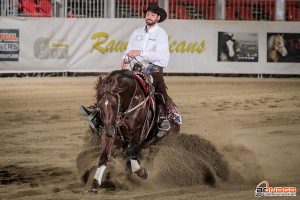 Cremona, May 20—The 2020 edition of the National Reining Horse Association (NRHA) European Futurity, held concurrently with the 2020 IRHA/IRHBA/NRHA Futurity in Cremona, Italy, wrapped up on Thursday night with the €160.623,00-added European Futurity Open Finals.

Nailing the €71.000,00-added Level (L)4 Open and €48.000,00-added L3 Championships with a strong performance paid back by the judges with a 223.5 was Manuel Cortesi of Italy riding AR Vintage Dream owned by Azienda Agricola Cortesi Pietro. The duo had tied to lead the qualifier and bettered his score by a point and a half in the Finals. “This is truly a great horse who has always shown me how generous he is,” said Cortesi about his mount by NRHA Two Million Dollar Sire A Sparkling Vintage out of Sweet Candy Dream. “He was bred by Luigi Parise and nominated by Elisabetta Raviola, who we purchased him from as a 2-year-old. I’ve had him in training since and showed him at the 2019 IRHA Open Futurity where we had the highest composite score after the go rounds. Unfortunately, he had an injury the night before the finals and we had to retire him from competition for a while. Because of the pandemic, he had more time to reach tip-top condition and after showing him for the first time at a regional show a month ago, we came back to Cremona to make up for the lost time and I am thrilled because he truly deserves this!” The pair also took home the 2020 IRHA 4-year-old L4 Open Futurity title. 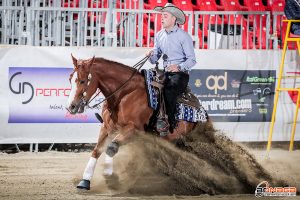 Taking reserve honors a point behind was Gennaro Lendi—who qualified all three of his mounts in the Finals—riding Davide Rossi’s Hollywood Dr, a stallion by Shiners Voodoo Dr out of Mistopsail Hollywood bred and owned by NRHA Two Million Dollar Owner Arcese Quarter Horses.

Gilles Huyghe of Belgium and Christian Baldelli of Italy—who both scored a 217.5—chose to share the €27.548,00-added L2 European Futurity Open Championship. Assistant for Fonck Performance Horses, Huyghe rode Smart Spooky Joe a gelding by NRHA Million Dollar Sire Lil Joe Cash out of Spookody, bred, owned, and nominated by Jean Louis Coutrot. “We were actually preparing him for Bernard [Fonck] to show here but we then decided that the reins would pass on to me,” said the young professional. “I am very grateful for this opportunity and am thankful that this adventure ended with a co-championship. He’s one of my favorite horses: He’s a fun horse at home, always acts really happy, and is super sweet-minded.” 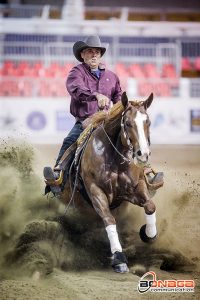 Baldelli rode Claudia Rizzola’s Step In The Night, a gelding by Saturday Night Custom out of Wimpys Surprize Chex bred and nominated by Ambrosini Quarter Horses. “It’s all really emotional and I still cannot believe that this long-awaited Futurity has finally taken place,” said Baldelli who qualified his mount for the levels 4, 3, and 2 Finals. “It’s too bad we incurred in a penalty tonight, but I am super happy with this result for the horse and for his owners. He’s a gentle big horse with an even bigger heart we purchased last year to show in the Euro Futurity. He will probably be shown by his owner in the [IRHA] Non Pro Derby and I am hoping to be able to show him again in the near future.” The duo also took the IRHA 4-year-old L2 Open Futurity Championship.

The €14.074,00-added L1 Open also saw two riders that chose to share the title with a 213.5 score: Giulia Mandaletti and Andrea Costa. The first rode her own Miss Dr Feel Good (Hollywood Gun Dunnit x Miss Doctor Whiz), a sorrel mare bred and nominated by Andrea Castelli. “She is homebred and is out of a mare that my boyfriend Andrea [Castelli] used to ride,” said Mandaletti about her mount who was trained and shown by Mattia Nadalini as a 3-year-old. “I am very excited to have had the chance to ride her here. Last year I started riding her myself under Nadalini’s supervision. She is a very sensitive mare and having started riding her not too long ago, we are still getting to know each other. The finals here went much better than the qualifier. I had a lot of fun and I really hope to be able to show her at the Derby too.” 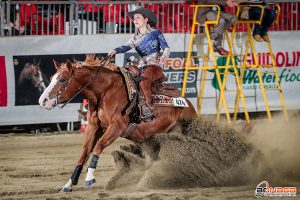 RR Branding Star, an American Paint Horse by past NRHA Open Futurity Champion RR Star out of As I Want, was originally supposed to have been shown at the Euro Futurity by his owner Melaine Cartier. In training with Andrea Costa since the end of last year, and not having had the chance to show during the pandemic, the decision that Costa would keep the reins was made. “I had never shown him prior to this event, but I’m thrilled this decision was taken,” shared Costa. “He was trained by Giovanni Masi who showed him in the 2019 IRHA Open Futurity. He’s a huge stopper, good-minded, and is very talented. We have not made future plans yet and don’t know whether it will be Melanie or I at the reins, but I do hope to show him again eventually.” 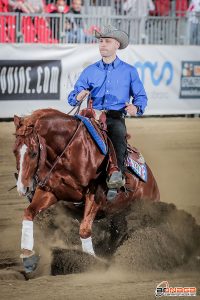 The successful 2020 edition of the NRHA European Futurity managed by IRHA came to a close once the last rider in the Open division left the arena on Thursday night. Due to the pandemic, it was held concurrently with the 2020 IRHA Futurity at CremonaFiere and was run following strict COVID and EHV-1 protocols. NRHA and IRHA would like to thank Euro Futurity main sponsor NRHA Corporate Partner Markel, Official Insurance Partner of NRHA, gold sponsor NRHA Corporate Partner Cardinal Reining Horses, as well as the nominators, breeders, owners, and riders who once again contributed to supporting the event.