Aboard NRHA Hall of Fame Inductee and Two Million Dollar Owner Rosanne Sternberg’s Shines Like Spook, Fonck scored a 222. The talented gelding by NRHA Six Million Dollar Sire Smart Spook out of NRHA Million Dollar Dam Ebony Shines, bred and nominated by Sternberg, had already left his mark in the pen by winning the 2020 Belgium and German Breeders 4-year-old L4 Open Futurity with the Belgian professional in the saddle. “The last time we showed was in October last year and I must admit that I was a little worried. My horse was really nice for me; he’s super talented, athletic, and has matured so much since last year,” said Fonck with her trademark smile. “If you see him in the stall, you just walk by because he’s ‘just a small sorrel,’ but when your ride him, he’s amazing. I have to thank Rosanne [Sternberg] for her trust in our program and for always making me feel confident that everything will be alright!”

AR Vintage Dream, owned by Azienda Agricola Cortesi Piero, was bred by Luigi Parise and nominated by Elisabetta Raviola. “We purchased this horse as a yearling from our client Elisabetta [Raviola] so I trained him myself,” shared Cortesi. “In the beginning he didn’t seem as promising as he turned out to be. I showed him the first time in a regional pre futurity which we won. Together we earned reserve honors in the 2019 Austrian Open Futurity and also topped the composite go round rankings in the IRHA Open Futurity. Unfortunately, he was injured right after the qualifiers and wasn’t shown until a month ago, so I am really happy with the result here.” It’s two in the finals for Cortesi as well: The Italian professional also qualified Like A Showgirl (My Showbiz Whiz x Sliden Like A Winner) for owner Lenka Lukackova. The mare was bred and nominated by Ambrosini Quarter Horses.

Christian Baldelli of Italy topped the L2 European Open Futurity qualifier as well as the €1.480,00-added IRHA 4-year-old L2 Open Futurity go round riding Claudia Rizzola’s Step In The Night (Saturday Night Custom x Wimpys Surprise Chex), a gelding bred and nominated by Ambrosini Quarter Horses. “He’s a great horse and I’ve finally managed to show him. We’ve been waiting to show in this futurity since last year when we purchased him!” said Baldelli. “He showed us all how talented he is and I am certain he will be even better in the finals. The best thing about showing him is that we both had fun.”

Spooks Gotta Dance (NRHA Million Dollar Sire Spooks Gotta Gun x Dance Little Spook), owned, bred and nominated by Quarter Dream, rode Lena Maas to top the L1 qualifier. “I started riding this horse a few months before the Belgium Futurity last year where we won the Level 1. We were really looking forward to this Futurity that was supposed to be held last year in November so I am really happy for how things went in the go round,” said an enthused Maas, assistant trainer at Quarter Dream. “I really like him a lot, he’s really honest, and since last year we’ve become a team. I wanted to have a clean run in the go round so as to make the finals: We did and now I’m truly looking forward to Thursday.” 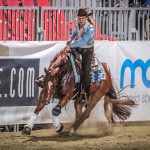 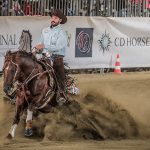 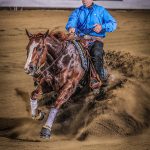 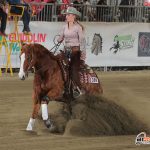 Riders eligible for the Consolation will have the chance to earn their way to the NRHA European Open Futurity Finals on Tuesday, May 18. The Finals will be held on Thursday, May 20.

The 2020 IRHA/IRHBA Futurity, run in conjunction with the NRHA European Futurity and FISE Reining Championship Finals, is held behind closed doors following COVID and EHV-1 protocols.