With a 227.5 score, NRHA Two Million Dollar Bernard Fonck and GP The Stud In Town (NRHA Two Million Dollar Sire Hollywoodstinseltown x CP Surprise) owned, bred, and nominated by Golden Paint Ranch, conquered the crowd, the judges, and the $41,808-Added L4 European Open Futurity Championship. “My palomino was really good in both the qualifier, where I didn’t really need to push him, and in the finals. I would really like to thank the owners for allowing me to school him at shows,” said the Belgian. “This is a really great facility, and I would like to thank Greg and Claire Morat for supporting our sport.” Both Fonck and owners, Golden Paint Ranch, received the inaugural NRHA European Futurity Open Championship ring sponsored by MS Diamonds TX.

Reserve honors with a 226.5 score were for Italian Mirko Midili and Spark Made Whiz (Spark N Whiz x Mare Made), a mare bred, owned and nominated by Luga Quarter Horses.

Italian Davide Brighenti & BB Gotta Gold Tinsel (Gotta Gold Chain x JP Grays Starlett), a stallion owned, bred, and nominated by Barbara Braun, scored a 220 claiming the $31,356-Added L3 European Open Futurity Championship. “This is a fantastic horse I got in training when he was a 2-year-old and I immediately knew he was very talented,” said Brighenti. “He is very athletic, but most of all he is honest and is a show horse. He went well all week; the arena here is great. We were ready to show when we got here and I tried to ride him as little as possible since the arena is big and I am thrilled for this result.”

Riding to the Co-Reserve Championship, a half-a-point behind, was Germany’s Grischa Ludwig aboard Alexandra Schmitz’s Shine My Picabo (Shine My Gun x Custom Rome), a mare bred and nominated by Michel Rose; and Dominik Reminder of Germany riding Rock Crusher (Shine Chic Shine x Jokin Peppy), a stallion bred and nominated by Cecilia Frediani and owned by Jaqueline Seger.

Andrea Costa of Italy and Phantom Chic Dream (NRHA Eight Million Dollar Sire Magnum Chic Dream x Phantom Of The Arena), a gelding owned and nominated by Christian-Peter Zinsli, scored a 215.5 to claim the $20,904-Added L2 Championship. “We purchased this horse bred Peter Morgan as a 2-year-old in the States and brought him to Italy,” said the Italian rider. “Martin Larcombe—who I worked for in the past—went to try him out for us. This winter he matured a lot, we gelded him, and has become better and better lately. I am so happy for this title, in particular for the owner who truly deserves it.”

With a 214.5 score, Glen-Arthur Estival and Heza Frozen Inferno (Inferno Sixty Sixty x Sailor Will Win), a stallion bred and nominated by Azienda Agricola Le Fattorie di Matilde, owned by Latigo Global Equine LLC, took home the L1 Open title. “I purchased this horse after the Italian Futurity last year where he was shown by Arnaud Girinon,” said the French rider. “This is the first show with him and I’m very happy with the way he went here.” 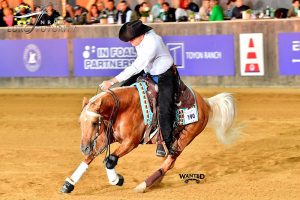 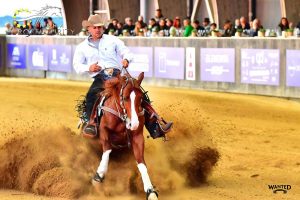 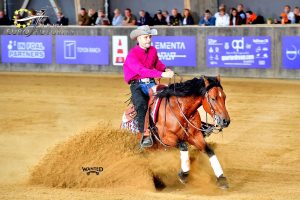 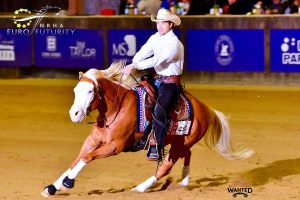 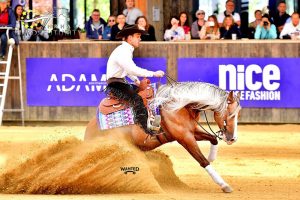 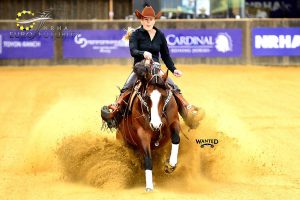 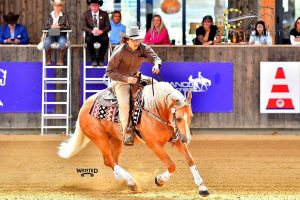