Spanish Nogue Puig and his own Simple The Best 66, a mare by Inferno Sixty Six out of ARC Yellow N Lime, bred by Ambrosini Quarter Horses ASD and nominated by Lenka Lukackova, had already left their mark in the arena by winning the 2021 Italian Reining Horse Association (IRHA) L4 and L3 Non Pro Championships. They made their way to France and left with the 2022 Non Pro title under their belt. “The final was great and I am really happy with all her maneuvers today. Even though she was a little tired, she gave me all she had,” said Nogue Puig about his mare who he purchased as a yearling.  “I love her, and I can still picture what I could see between her ears when I rode her for the first time as a 2-year-old. The show here was wonderful and now plans are to show her at the NRHA Germany Breeders Futurity in Kreuth and the IRHA 4-year-old Futurity. I could not be any happier about our journey together.”

Claiming the $ 31,356-Added Markel Insurance L3 Non Pro Championship as well as the L4 Reserve Championship with a 213.5 was Nadine Kamintzky riding her own Frozen Gambler (SG Frozen Enterprize x Surprise Me Gamble), a gelding bred and nominated by Davide Brighenti.  “I am overwhelmed…I did not expect this! I was so insecure as I have not ridden him much since he was back in training and I actually told my trainer [Brighenti] that maybe we should not come here,” shared Kamintzky. “It was a long and windy week but really nice. My horse got better and more focused every day and I am super thrilled.”

Riding to the $ 20,904-Added L2 Non Pro Championship was multiple past NRHA Non Pro World Champion Manuel Bonzano riding Miss Machine Gun (Yankee Gun x Sanditch Rooster), a mare owned by Azienda Agricola 23 Quarter Horses and nominated by Maria Sole Cubeddu, scored a 212 which earned him the Championship. “It was an emotionally difficult show for me, but I am happy because we managed to do well,” said Bonzano. “This mare is out of a mare I own and Bebe Sarao trained her. She was still a little green as a 3-year-old, but she matured a lot and this year she really is solid. I am happy with this result and I have to give credit to my trained Dominik Reminder. She’s a wonderful non pro horse and I am so happy that all our new 23 team made the finals in the divisions they were entered in.”

Denise Kummer rode her own Chic Is My Gun (Tinseltownsmokingun x LV One Smart Lady) to a 211.5 claiming the L2 Reserve Championship as well as the $10,452-Added 1 title. With the mare bred and nominated by Julia Gaupmann-Lechner, the Austrian rider shared that her ‘small little mare’ had a tough time competing with her fellow reiners but did a very good job. “She was so calm and the great thing about her is that she always manages to take care of my nerves.”

Filippo Antonutti and his own AK One Little Gun (One Gun x RX Dodsons Lil Step), a gelding

The 14th edition of the NRHA European Futurity once again wrote another important chapter thanks to the great NRHA and BO Ranch Teams.

We now look forward the NRHA European Affiliate Championships which will be held at CS Ranch, Givrins, Switzerland, on July 13-16. 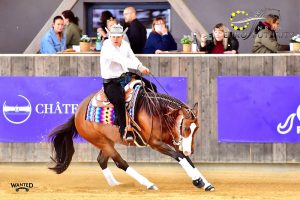 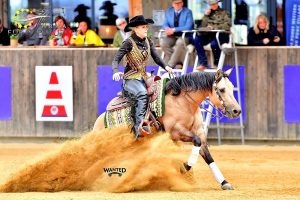 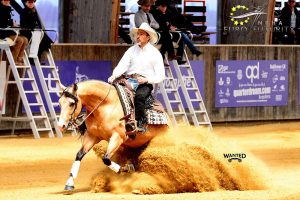 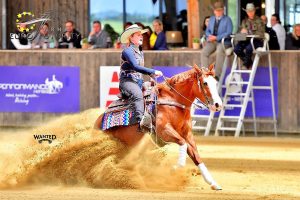 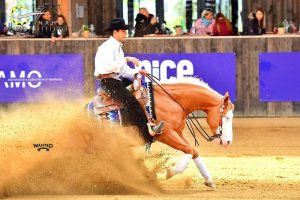