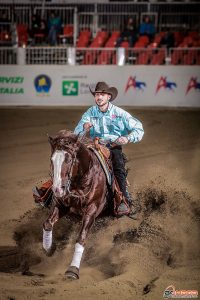 The Open Finals on Saturday night kept the public glued to their seats until the very last horse. Once the last combination to go, qualifier leaders NRHA Million Dollar Rider Cira Baeck and Americasnextcovrgirl, closed their run with a 222.5, the $109,354-added Level (L)4 Open title was confirmed for Mirko Midili riding GD Peptos Olena Blue, an American Quarter Horse stallion by past NRHA Non Pro Champion Spat A Blue out of Miss Peptos Jacky— owned and nominated by Domenico Giannitti—who had posted a 223 earlier in the draw.

“I am really happy because this horse and his owner deserve this win. The owner puts a lot of passion in his horses and his breeding facility, which is getting bigger,” said Midili who has had the stallion in training since last year. “Our first major event win together was the 4-year-old German Breeders Futurity a few weeks ago. Here, even though in the go round I didn’t feel him as good as he usually is, tonight he was himself. He’s an amazing show horse and I am absolutely sure that he still has a lot to show and the ride of his life is still to come!” Midili and the blue-eyed stallion also took the IRHA 4-year-old Open Futurity Championship run concurrently with the European Futurity. 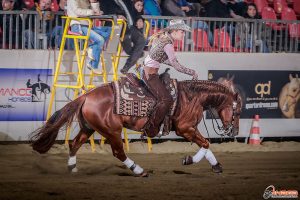 With an amazing ride worth 219.5, 21-year-old Lena-Marie Maas swept the $65,612-added L3, $38,881-added L2 and $19,440-added L1 divisions aboard Arnels Spat Olena (NRHA Million Dollar Sire Spat Olena x RS Arnels Feo Jac), bred, owned, and nominated by Sabrina Adam. The duo also took the IRHA 4-year-old L2 Open Championship. “I have no words…I’m speechless,” said Maas, assistant trainer at Pietro Marseglia’s Quarter Dream who placed all her three mounts in the Finals. “He was so nice; he was already great in the go round and tonight he gave me all he had. I had so much fun showing him, it was simply amazing.”

Maas started riding the talented stallion a few months ago, and said that they immediately clicked. “He immediately showed me what a big heart he has,” she added.

L3 go round leaders, Manuel Cortesi and PC Sliderina One (One Gun x PC Sliderina For Me), owned and nominated by Az. Agr. Cortesi Piero, claimed the L3 Reserve Championship with a 218.5.

At 3 p.m. on Sunday, 14 November, the European Non Pro Finals will close the 13th edition of one of Europe’s NRHA owned most prestigious events.