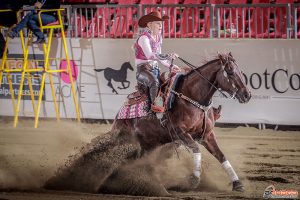 The $340,214-added 2021 NRHA European Futurity concluded in Cremona, Italy, with the Non Pro Futurity Finals on Sunday. With 27 finalists looking for the perfect score and the Championship titles across the four levels, two riders wrote their names on top of the final rankings: Stephanie Blessing and Vittorio De Iulio.

“I’m speechless and what a year this has been!” said an enthused Blessing. “All my horses were amazing during the whole show season and this mare was truly special. We purchased her as a 3-year-old from Edoardo Bernardelli and she was bred by Rabboni Performance Horses in Italy. I won the qualifier here and was last to go this evening but, during the whole Finals, I stayed away from the show arena and didn’t want to know any of the previous scores. I just wanted to have a clean run, just like we had in the qualifier, and amazingly enough, we did.” Prior to coming to Cremona, Blessing and her mount had already claimed the 2020 3-year-old NRHA Belgium Futurity L4 Non Pro Championship as well as the 4-year-old 2021 NRHA Belgium Futurity L4 Non Pro Co-Reserve Championship. 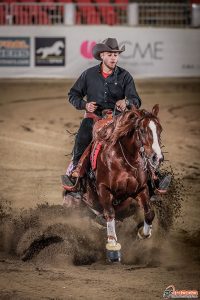 “We bought this horse in February from Angelucci Quarter Horses and I showed him at the 2020 IRHA Futurity held in May where we were reserve in the L1 Non Pro,” said the 21-year-old. “I have no words to describe him; I can really trust him in the show pen, he is a little electric in the spins, but in the circles, he was really nice. I’m already thinking about the next show season with him and I would like to do all the Derbies. We keep the horse at home but I always go to train with [Italian Professional] Pierluigi Chioldo, who I thank very much. He is really special and always helps me a lot!”

Riding to the reserve spot in the Levels 3, 2 and 1 with a 214.5 score was Valentina Monti riding Valentina Baby Pale, a mare by NRHA Two Million Sire Pale Face Dunnit out of OT Luky Highway Baby, owned and nominated by Monti.