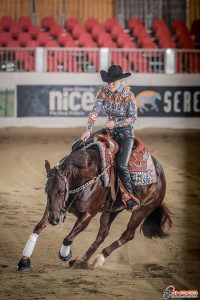 It wasn’t till the end of the day when Stephanie Blessing walked in the pen aboard her mare Smart Spook Surprise. The duo performed a run awarded a 216 score to lead the $49,817*-added Level (L) 4 Non Pro division. “I did not expect to have such a good run today!” said a surprised Blessing. “My mare was really great, she has such a big heart. Normally, she circles great, but today, she also stopped huge. I was surprised, because last night it didn’t look like she was going to stop so well and today she did, so I am happy. I just want to do the same thing in the Finals, that is our goal,” added the German rider.

Tying to lead the $31,591*-added L3 division, was Italy’s Roberta Gianformaggio aboard her gelding Shining N Speedy Gun (Colonel Shining Gun x Smart N Speedy), who scored 215. Gianformaggio’s show year has been very successful and the Italian non professional is quick to credit her horses and her trainer, Mirko Midili, for her success. “I love horses and I love riding,” said a smiling Gianformaggio after her qualifying ride. “I purchased this horse as a 2-year-old from breeder [and nominator] Mauro Taccia immediately after I saw him: There was just something special about him. Typically, when it’s love at first sight with a horse, we bond. I didn’t really need a horse but saw him, liked him, and he was mine! He has a wonderful personality, is a very honest horse in the show pen. The fact that he had to stop working because he contracted piroplasmosis and I had to look after him, really strengthened our bond. I am happy I purchased him and in the show pen he takes care of me all the way, as he did today.” 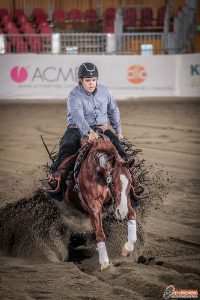 Lavezzari has been riding with Italian Professional Paolo Orlandini for close to three years. After bringing a horse in boarding at Orlandini Quarter Horses, Como, Italy, the 16-year-old decided to purchase As Just In Time, AKA ‘Giustino.’ At the time, the APHA gelding by One Gun out of FG Easter Calbar, bred and nominated by Stefania Bordogna, was 2-years-old. “The first time I rode him I immediately liked him, even though he had just been broke,” he said. “We grew up together and now it’s great to be in the Finals in two divisions at my first European Futurity. Today it was a really fun ride; he was so good, relaxed, and stopped really nicely. My goal now is to give it my all and do the best I can in the Finals.” The young team is also leading IRHA 4-year-old L2 Non Pro Futurity go round.

(*Subject to change in nominations)

The action in Cremona continues with the NRHA European Futurity Open Finals on Saturday, November 13, starting at 2 p.m. CET with Section 1 and followed by Section 2 starting at 6 p.m.